The death rate from colorectal cancer has been dropping for more than 20 years. This is partly due to screening and partly due to treatment. Improvements in screening mean that polyps are being found and removed before they develop into cancer. Cancers diagnosed at later stages have lower survival rates than those diagnosed at an early stage. The 5-year relative age-adjusted survival for colorectal cancer diagnosed at an early stage is 91%. For late stage diagnoses the survival drops to 52%.

Colorectal incidence and mortality rates are lower in the 7-county metropolitan area compared to the rest of Minnesota. These differences likely stem from: a combination of low colorectal cancer screening rates in rural areas; the availability of medical resources in urban versus rural area; and sociodemographic factors such as income and education that contribute to barriers to access to care.

From 2015 to 2017, an average of 1,275 males and 1,141 females in Minnesota were diagnosed with colorectal cancer each year. Minnesotans of different races and ethnicities have varying rates of cancer. These differences may reflect differences in risk factors as well as access to care.

What is colorectal cancer? 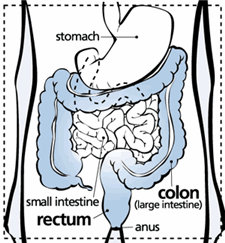 What are risk factors for colorectal cancer?

How can colorectal cancer be prevented?

Colorectal cancer screening is the best way to prevent colorectal cancer. Get screened regularly, even if you don't have symptoms. Most polyps on the colon or rectum can be found and removed before they have the chance to turn into cancer.

The American Cancer Society (ACS) and the United States Preventive Services Task Force have different recommendations for colorectal cancer screening that depend on age and family history. On May 30, 2018, the ACS updated screening guidelines for colorectal cancer by recommending that adults at average risk be screened starting at age 45. See American Cancer Society Guideline for Colorectal Cancer Screening.

In 2019, 73.6% of age-eligible Minnesotans had a current colorectal screening test (data from Behavioral Risk Factor Surveillance System). While overall screening increased, people that identify as Asian, American Indian, or Hispanic were less likely to have been screened for colorectal cancer than people that identify as white. Screening occurred more frequently in women and people aged 65 to 75, who were likely insured by Medicare.

Maintain a healthy weight, exercise, and choose a diet low in red meat and processed meat. Limit alcohol use and don't smoke.

Last updated May 2020. Updates are made when data become available.