Arsenic can be found in groundwater throughout Minnesota. Some areas have more arsenic in groundwater due to the natural  geology. The maximum contamination level (MCL) for arsenic in public water systems is 10 micrograms per liter of water (µg/L). Starting in 2008, all new private wells in Minnesota must be tested for arsenic. Data from 2008 to 2018 show that on average 10 percent of these wells have arsenic levels above the MCL (10 µg/L).Some wells have levels as high as 350 µg/L, however most results are below 50 µg/L. Arsenic levels vary between wells, even within a small area.

Geology helps show where arsenic may be high

Arsenic occurs naturally in soil and rock. Arsenic from soil and rock can dissolve into groundwater and enter drinking water wells. High levels are most likely to occur around the Twin Cities and west, to the state border with the Dakotas.

Most arsenic in Minnesota is from materials  left by glaciers thousands of years ago. The most recent glacial activity in Minnesota occurred about 14,000 years ago, and left a clay-rich material called the Des Moines lobe till. Wells within the area are more likely to have high levels of arsenic. 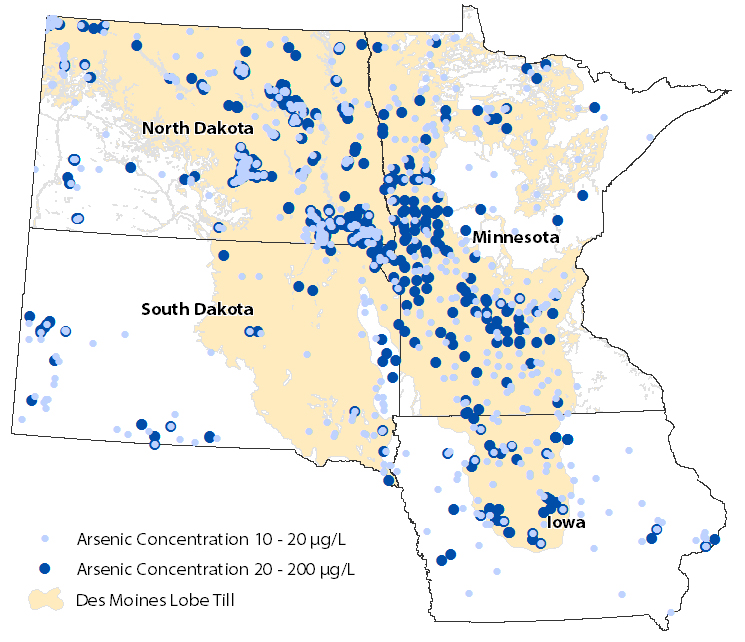 Note: Adapted with permission from Erickson and Barnes (2005).

Other sources of arsenic

Some arsenic in the environment comes from human activity, including mining and smelting ores. It was once an ingredient in some pesticides and was used as a wood preservative for things like wood foundations, decks and children's play structures.

How to protect yourself and your family

The only way to know the level of arsenic in your well water is to test the water. Minnesota Department of Health  recommends all private well users test for arsenic at least once. You can find certified laboratories that test for arsenic through the Environmental Laboratory Accreditation Program. You can also contact your county to see if they have any programs to make testing your water easier.

If arsenic is detected at any level, consider the following options:

Drinking water with even low levels of arsenic over many years increases the risk of diseases such as cancer. MDH highly recommends you take action if arsenic levels are above 10 µg/L.

Drinking water with low levels of arsenic over a long time is associated with diabetes and increased risk of cancers of the bladder, lungs, liver, and other organs. Coming in contact with arsenic can also contribute to cardiovascular and respiratory diseases, reduced intelligence in children, and skin problems, such as lesions, discoloration, and the development of corns. The level of risk depends on the type of arsenic, the length and level of exposure, and individual susceptibility - which can depend on things like age and genetics.